For a full explanation, head to NightmareFuelProject.
tl;dr is using pictures for writing prompts all October. 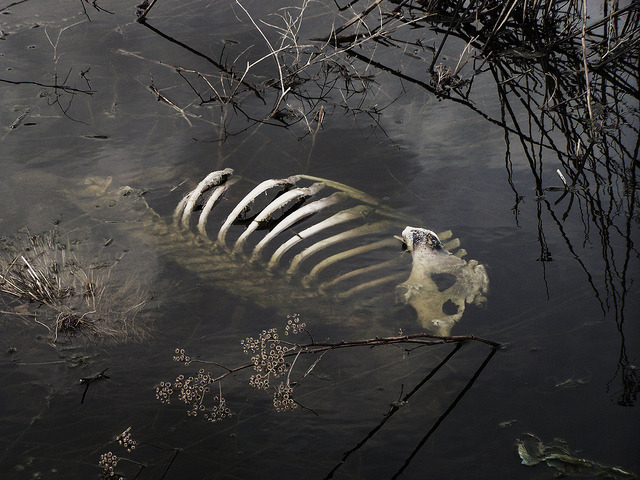 “I got one, get the net.  Finally, you fucker…” It had been a bad day for fishing. Ike and his son Junior had been out in the swamp since daybreak, but there hadn’t been a single bite. In previous years this had been their favorite spot to spend the day, drink a little, sometimes smoke a little, and come home with a cooler full of bass.  Today though, it was less that they weren’t catching as it felt like there wasn’t anything there to catch. No bites. No nibbles. No tugs. Just lines in the water and the silence of nature. Ike was thrilled that, as they were just about ready to pack it in, he got something on the hook.

His rod bent at a vicious angle, “It’s a biggie.”

“Or you’re caught on the bottom,” said Junior, sliding in next to him with a net in hand.

“You shut the fuck up and get that net ready,” Ike had always said a bad day fishing was better than a good day doing anything else, but there was something about this trip that had just felt strange. Maybe it was that he and Junior had felt distant since Ike lost his job. Maybe it was that the air was so still he barely heard a bird tweeting or a leaf rustling. They used to talk about how the world was doing, but the world hadn’t been doing so well, so it wasn’t an enjoyable topic to bring up.

Ike pulled and finally felt some give, reeling as fast as he can. “This ain’t no branch… we got ourselves the real deal here.” This was the first moment he felt good about the whole trip… him versus his prey.  This thing was a fighter though. Inch by inch he pulled it in though, and just when he thought it was getting easier, there would be a surge of energy on the line and the fight would start up again.

“Get it ready…” the murky water around  where his line disappeared was starting to stir. In another few seconds they would see just real this deal was.

Ike pulled back hard and the line went loose.

“FUCK!” Ike yelled out.  Whatever it was had gotten away.

“Pop, it’s ok.. why don’t we just..” Junior started, but Ike’s neck pivoted to look at him in a way he hadn’t seen since he was a child. It was the look that said ‘say nothing more’ and Junior obliged with silence.

“Get me the worms.” Ike said, reeling in his line.  Junior kept his sigh as quiet as possible. His father was a stubborn and proud man. He had wanted to go an hour ago, but now that there was proof the fish were out there, he knew they weren’t leaving until there was one in the cooler.

Ike continued to reel until he saw something fly up out of the water, letting up a little splash as it flew into the air and dangled in front of his face, hanging from the hook. “…the hell is that…”

A yellow orb, dripping with.. mud? blood? was spinning violently at the end of Ike’s line.  Junior put down the can of worms and stepped up to get a closer look, watching as this sickening yellow sphere spun left, spun right, thin veins of red crawled across it like rivers on a map, and the dangling pink jungle of lines and tethers hung below it.

“Pop,” Junior said, feeling his stomach start to give up their lunch, “I think that’s an eye.”

“That thing’s twice as big as any eye I’ve ever see–” Ike was cut off by their boat jerking violently to one side sending both father and son tripping over the bench they had been sitting on and landing together in a heap against the wall.  As the boat fell back against the water, both men tried to get back to their feet, but again, the boat lurched and Ike slipped, falling over the side.

“POP!” Ike tried to grab his father’s hand, but missed by a large margin, almost over-extending himself and falling in after him.  The boat started to even out, and Junior was still standing there, staring at the water. He expected his father to emerge almost immediately, and he would grab him, but five seconds passed and there was nothing.  At ten seconds he was trying to figure out if he should jump in after him when something broke the surface.

Hundreds of bubbles. He stared, shocked frozen, as a line of air, his father’s air, escaped to the surface.  A dark spot began to grow on the surface as well, like the water being stained. Another bubble, the last one, broke amidst the darkness and the froth it brought with it was pink.

That woke Junior up. He stepped to the back of the boat and pulled the ripcord and the motor sprung to life.  He pulled the handle to drop the blades it into the water, thankful that they had never thrown out the anchor.  The boat tipped upward and the dread that was being tampered down by adrenaline surged in Junior again. Instead of the boat flipping, like he feared, the blades of the motor began pushing him forward.

As the boat made its way from where they had just been, Junior looked back in time to see something bob up from beneath the black stain that was now a dozen feet across. He couldn’t say for certain, but when he would tell the story over the next few years… to his wife… to his mother… to the police… he would swear that what he saw surface was bones. Bones picked clean of any ounce of flesh.

inhisllikeness.com somethingcast.com
View all posts by RevVoice →
This entry was posted in Writing and tagged 2020, Horror, Nightmare Fuel, Writing Prompts. Bookmark the permalink.